I tried out what you suggested, and I totally agree! Here are the results (this is starting to feel like it is getting very close to a finished project, the symbols are much more readable now): download/file.php?mode=view&id=364

Yes. Thanks for that. We're definitely getting there. Can you explain why you didn't go with my version of the triple scroll, which has no close approaches between scrolls (more uniform whitespace between them)? Is it because of the middle one getting lost against a staff line? I had hoped that was mainly an issue when that shape was used for symbols with only a single scroll.

The two new unencoded scroll components should be a single scroll each, even though they are for use in a double scroll and triple scroll respectively. The duplication and triplication should be done in the encoded symbols that reference them. That's so we only need to make any change in one place.

I would like to have a bit more of a fiddle with the outlines, but I have too much other stuff on for the next few days.
Top

Sorry for the long delay on this reply. I have done everything you have suggested, and worked through each symbol with a fine-toothed comb.
Apologies about not using your symbol directly. I tried to copy-paste the glyph you made into the font I have been working with, but it wouldn't let me import it. I have no clue why. So I just modified the double-dent symbol I derived from the standard single scroll until it looked similar to the one you made. You are right---it is not similar enough, so I have further modified it to match yours as well as possible.

Here are the results:

And here is the FontForge File:

If you have any time to fiddle with this a little more, I would definitely appreciate that! I have again, spent many hours trying to get the spacing as optimized as possible within the constraints of our initial design. I am not sure I know how to do much better with my limited knowledge of symbol design and the program.

Thanks so much for that. I believe the double-scroll and the triple-scroll look too much alike when on a line. I believe I can improve them without compromising anything else. I should be able to get to it in a few days.
Top

So much for me getting to it "in a few days". Sorry. But I am now working on the Stoic symbols.


ndentonprotsack wrote: ↑Tue Jun 01, 2021 3:16 amI tried to copy-paste the glyph you made into the font I have been working with, but it wouldn't let me import it. I have no clue why.

Ah yes. I remember struggling with that gotcha early on. I eventually discovered that, in order to be able to copy and paste between font files, they have to be open in the same instance of FontForge. If you open each file separately from the operating system's file manager, you will get separate instances of FontForge, that apparently don't communicate with each other. So you have to open (at least) the second file from the File/Open dialog in the first instance. Then you can copy and paste between them.
Top

When I imported the 8-pixel-per-staff-space bitmaps into the background layer of the 2 and 3 dent symbols of your latest .sfd file above, it became apparent that the scrolls in the 3 dent symbol were not as far apart vertically as they should have been. They were only offset by 199 font units when they should have been 256 font units (half a staff space) as in the bitmap version. That corresponds to 3 pixels instead of 4 in the 8-PPSS bitmap.

I also decided that, for aesthetic reasons, the scrolls in the 2-dent symbol should be 320 fu apart instead of 256 fu. That corresponds to 5 pixels instead of 4 in the 8-PPSS bitmap. This is so that they consistently align with the (left) barbs in the 10-dent symbol.

I then decided I needed to go back to the bitmaps to find and prove a double-scroll that is sufficiently distinct from the triple-scroll when they are both on a line, while at the same time being recognisably intermediate in shape between the standard single (right) scroll and the triple scroll I devised previously. Here's the result. 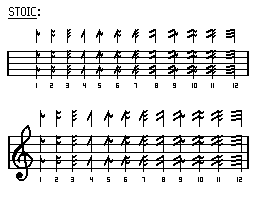 So now I'll go back to FontForge, import the new 2-dent bitmap, and try to produce a corresponding double-scroll outline. I don't think it will require many changes from the one you have already made, except for the slightly greater vertical spacing.

Stoic9thAttempt.png
(3.92 KiB) Not downloaded yet

Wonderful Dave! Thank you for this, and it is great to hear from you again. I am looking forward to seeing how these bitmaps translate; I definitely agree with the choices you’ve made in these final prototypes.

You may also be happy to hear that I am mentioning the work we have done on this system in my PhD research proposal (the step that takes me to my candidacy). The proposal is not going to be published or appear anywhere outside my review panel, but I am hoping to eventually write an article some time soon that talks at length about this system and its usefulness for transcribing complex sounds from field recordings and/or certain non-western musical practices that utilize free intonation (or other tricking-to-notate kinds of tuning). I could go on a long rant about how this all relates to my thesis/research, but I will save that for another time as it is midnight here haha.